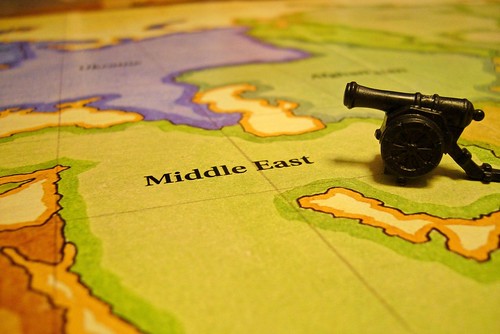 (Photo Credit: Stewf’s Photostream)
This post, which originally appeared at The Havana Note, is a guest note by Tom Garofalo, a consultant for the New America Foundation/U.S-Cuba Policy Initiative.
Israel’s controversial Foreign Minister Avigdor Lieberman suggested a not-so-novel approach to the problem of Iran’s nuclear ambitions recently. He wants to apply what he calls the Cuban model, in which “the United States alone can do everything in order to stop this (Iranian) program.”
There are a few immediate contradictions. For starters, Lieberman believes that the Cuban model works best if it includes an international aspect, such that the United States would “shun foreign firms that continue to do business with Iran.” That extraterritorial component was added to our Cuban Embargo in 1996 with the passage of the Helms Burton act. But, perhaps unbeknownst to Lieberman, it has been dutifully waived every six months since, at the behest of our allies.
Mr. Lieberman may also be surprised to know that one of the first countries to suffer the consequences of such a shunning would be Israel, a leading investor in Cuban agriculture. The USDA reports that Israeli capital has driven a reinvigoration of Cuba’s citrus sector, to such an extent that an Israeli-Cuban joint venture now produces a third of the total citrus grown on the island. (Well, if they can make the desert bloom, why not Cuba?)
Fortunately, few policy makers — even among Cuban embargo supporters — are interested in repeating the fifty-year Cuba embargo experiment in the Middle East. In fact, irony of ironies, the example of Lieberman’s own Israel is instructive on this point: When President Bush was doing his best to isolate Syria, the Israelis were conducting talks with them under Prime Minister Ehud Olmert in the hope of reaching a peace agreement.
Like Israel, the United States did come around to a different view of things in Syria. As David Broder points out in Congressional Quarterly this week:

By the end of Bush’s presidency, it became clear to many in Washington — both on and off Capiol Hill — that his policy of isolating Syria had failed. Jeffrey D. Feltman, the assistant secretary of State for Near Eastern Affairs, notes that French President Nicolas Sarkozy was openly engaging the Syrians, as were the Saudis. Even the Israelis were talking unofficially to the Syrians. “So you ended up at a point when it was no longer Syria being isolated; it was the United States that was being isolated,” Feltman told a Washington audience at the conservative Hudson Institute in January.

Last month President Obama named career diplomat Robert Ford to be the first U.S. ambassador in Damascus since 2005, bringing a relatively swift end to an abject policy failure. But at least it is a failure that we learned from, without fifty years of trying it in different ways.
To be sure, our new engagement of Syria has not solved our problems: The previous US ambassador in Syria, Margaret Scobey, was withdrawn after former Lebanese Prime Minister Rafik Hariri was assassinated in an operation presumed to have been set in motion in Damascus. Today, blame for that act has still not been officially assigned. And Syria and Israel are unlikely to come to a peace agreement (which would necessarily involve Israel’s returning part or all of the Golan Heights) with the kind of right wing government in place that would have the likes of Lieberman in the position of foreign minister.
But even if engagement with Syria won’t achieve all our policy goals in the region, there are concrete advantages to sending an ambassador to Damascus. As a Middle East expert points out in the CQ story, Ambassador Ford is now engaged in high-level contact with the Syrian government, which will give us insight into the country that we’ve lacked. And the fact that our policy is no longer all stick and no carrot can only help us in our effort to be more informed about all the other issues at play there, from Turkey to Afghanistan and beyond.
Lieberman’s invocation of Cuba is instructive, though not in the way he probably hoped: it points out the futility of unilateral sanctions, wherever they unfortunately are deployed.
— Tom Garofalo