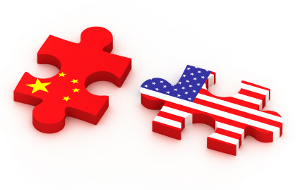 Douglas Rediker is the Director of the Global Strategic Finance Initiative at the New America Foundation. Taiya Smith is a Senior Associate at the Carnegie Endowment for International Peace and was the lead negotiator for the U.S.-China Strategic and Economic Dialogue at the Department of the Treasury under Secretary Paulson.
Tomorrow, senior government officials from the U.S. and China will meet in Washington for the inaugural Strategic and Economic Dialogue, a.k.a. the S&ED, which is the successor to the Bush Administration’s Strategic Economic Dialogue – or SED.
The meeting, at which top level delegations from the world’s two most powerful nations get down to business and discuss some of the world’s most pressing issues side by side – or at least across the same table, represents far more than a shift in punctuation. It is a test of whether the Obama Administration can present a unified front and demonstrate that it is serious about working together to improve and expand the U.S.’s relationship with China.
The original SED was the vision of then-Treasury Secretary Hank Paulson in 2006. Pre-dating today’s calls by some for a “G-2”, the SED reflected Paulson’s belief that that China views strategic issues, outside Tibet and Taiwan, primarily through an economic lens.
The SED provided a single, comprehensive, high level forum at which the U.S. and China could discuss issues as disparate as the Doha round, Iran, energy policy and climate change from a similar (economic) vantage point. By getting multiple cabinet departments in the same room, it provided both governments with access to nearly every aspect of the other’s policy making apparatus – each speaking with one voice.
The Obama Administration has taken this precedent and made several structural modifications, the most significant of which is that while the SED was solely led by the U.S. Treasury Secretary and Chinese Vice Premier Wang Qishan, the S&ED includes both Secretary of State Hillary Clinton and the Chinese State Councilor Dai Bingguo as joint leaders of their delegations.
This shift appears to be the result of an Obama Administration compromise to avoid choosing between Secretaries Clinton and Geithner as to which would take the lead in handling our most important bilateral international relationship.
As a consequence, instead of looking at strategic issues from an economic perspective, “strategic” issues are now formally separated out from “economic” ones, thereby dividing the dialogue into two separate discussions under two distinct sets of leadership.
This division risks undermining the basic thesis of the original format – that, when dealing with China, economic issues are themselves inherently strategic. It also adds a complex and political layer of domestic coordination to the already difficult international one. With four principals speaking on economic issues rather than two, the risks of inconsistent messages and misunderstandings increase significantly.
To maximize the chance of a successful outcome from this initial S&ED, we recommend:
1 – Secretaries Geithner and Clinton should become very close friends. So should their deputies and cabinet colleagues. The U.S. needs to ensure that each speaker delivers a consistent message. In dealing with China, economic, foreign policy and other issues are often indistinguishable from one another. There cannot be any discord between senior members of the delegation. Further, participating U.S. Cabinet departments should consider how their individual agency agendas can contribute to the success of the broader dialogue.
2 – Ensure the right people are at the table. Each side should have Cabinet level participants and other key players in attendance and ready to deal with their individual counterparts. The U.S. team should understand who plays what role from the Chinese government side and foster the right bilateral relationships from the outset. On climate change, for example, an issue which spans multiple agencies, the two sides should ensure that their top climate change officials are present and actively participating in the conversation, regardless of whether they are from similar agencies or ministries.
3 – Listen to what’s being said. Many Americans find it difficult to listen to formal Chinese presentations. Yet, these speeches represent the messages that China wants to send. Our delegation must listen carefully and make sure that they fully understand what is being said. Instead of furtive bathroom breaks and phone calls, they should ask questions and demonstrate engagement.
Lack of coordination, consistency or other missteps at the S&ED will not end the U.S.-China relationship. The SED built a strong foundation and there are numerous other dialogues and forums through which China and the U.S. can meet and discuss important issues. But, the potential undermining of this one harmonized meeting would be a setback to how effectively that relationship can be managed.
At some point down the road someone may seek to redefine the relationship and call it the “G-2”. In the meantime, a tightly coordinated, well-executed S&ED may be just the format to advance the world’s most important bilateral relationship.
— Douglas Rediker and Taiya Smith