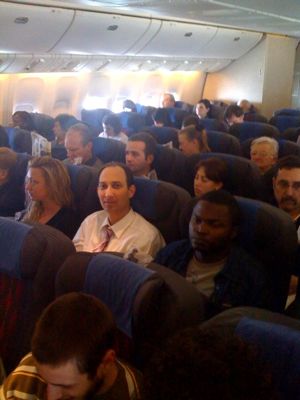 Tevi Troy‘s business card reads “The Deputy Secretary of Health and Human Services.”
That’s right. He’s not one of five deputies. He’s the second highest ranking guy in the Department.
Tevi Troy is smart, modest, self-effacing, and an author of an excellent book, Intellectuals and the American Presidency: Philosophers, Jesters or Technicians?
And I wanted to share this picture I snapped of him — way back in the back of the plane — flying economy class back from Brussels to Washington, DC. He didn’t have an “economy plus” seat even though many of those were open. Indeed, lots of business class seats were open.
I’m not one who thinks that Ambassadors and Secretaries and Deputy Secretaries and Assistant Secretaries ought to be flying around the world first class — but on long flights, I think that these hard working civil servants ought to get a break now and then. He had about the worst seat United Airlines could have assigned him.
I know one of United’s lobbyists in DC — a former top Democratic party House staff member — and he flies first class wherever he goes on the airline’s dime.
Not that United needs to hand out leg room and free cookies in comfy chairs to senior government officials — but geez, the Deputy Secretary ought to at least get ‘economy plus’ seating.
To his credit, Tevi Troy didn’t utter a word of complaint. He worked the entire flight.
Let’s see where United Airlines seats incoming Obama administration HHS Secretary-nominee Tom Daschle’s Deputy in the next administration. . .
— Steve Clemons