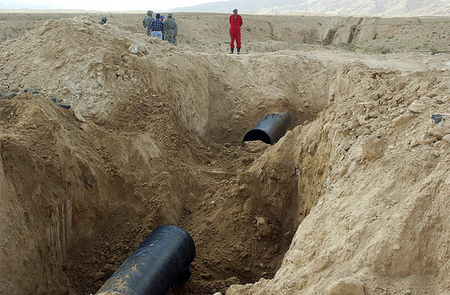 (Photo Credit: jamesdale10’s photostream)
More than six years after the United States invaded Iraq, Iraqi Kurds finally exported oil to Turkey for the first time yesterday.
The oil exports indicate two important developments.
First, Ankara has made a strategic decision to engage the Kurdish Regional Government (KRG) in Erbil, Iraq. It appears that at least for now the commercial opportunities for trade, investment, and energy supplies outweigh Ankara’s concerns that an independent KRG might encourage Turkey’s own restive Kurdish population to seek greater autonomy. (For more on relations between Ankara and Erbil, the Kurdish Globe published a very informative interview with Atlantic Council Senior Fellow David Phillips earlier this week.)
Second, the precipitous drop in the price of oil over the past year has forced Baghdad’s hand. Baghdad did not want to allow the exports, but needs the revenue to prevent further budget cuts. Baghdad will receive 88% of the revenues, with 12% going to foreign investors. Baghdad will then send 17% back to the KRG.
If Baghdad is going to enjoy most of the revenues, why does the decision to allow the exports represent a concession?
The answer is that the KRG is slowly building a case for increased autonomy and perhaps eventual independence. The exports increase the KRG’s value to Turkey, a country with large and growing energy needs. Furthermore, Iraqi Kurdish oil could potentially flow beyond Turkey into Europe, building a constituency for the KRG further to the west.
The other piece of this is that the act of owning, managing, and selling natural resources is a core state function according to international law.
The International Crisis Group, in its excellent 2008 report, Oil For Soil: Toward A Grand Bargain on Iraq and the Kurds, quotes an energy expert who explains that

The Kurds care about owning and managing the oil
industry more than about revenue sharing because
they want to establish sovereignty and build up a
record over time of examples in which the KRG
has exercised effective sovereignty and use this as
a basis for a claim of independence under international
law.

It will also be interesting to follow whether Iraqi natural gas flowing through the proposed Nabucco pipeline could eventually offer Europe an alternative to Russian gas.
More on that later.
— Ben Katcher