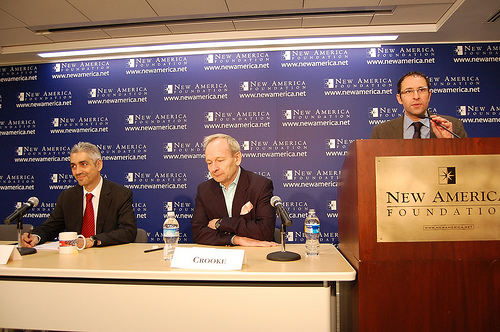 Tom Kutsch is a Research Associate at the New America Foundation/Middle East Task Force.
At a recent event at the Carnegie Endowment for International Peace, Rob Malley aired a very sly caution for the Obama administration on Israel-Palestine: “the Bush administration has left a doubly harmful legacy: It did the wrong things poorly, which creates the illusion that somehow they can be done well.”
A particular case in point is the ongoing reluctance of the new administration (and Western governments more broadly) to jettison the Bush-era policy toward Islamist groups like Hamas.
The current administration surely recognizes the folly the Bush administration made in encouraging Palestinian elections in 2006 and then refusing to deal with Hamas after its stunning electoral victory, but it has yet to replace the old policy.
Many Middle East watchers (see, for instance, the recent bipartisan statement shepherded by the U.S./Middle East Project) have come to the realization that continuing the Bush administration’s policy of isolation vis a vis Hamas does little to address the question of how to put the Palestinian “Humpty-Dumpty” back together again.
Think it’s a tactical mistake to deal with Hamas? Fine. But that begs a larger strategic question: how, exactly, can any reconciliation between a fractured Palestinian polity between Gaza and the West Bank (essential for future agreements) not somehow involve the group that is actually ruling the former.
And remember, recognizing the Hamas reality is not synonymous with direct American negotiation; it just means the U.S. shouldn’t actively attempt to obstruct ongoing reconciliation attempts between Hamas and Fatah.
Nor would a change in policy somehow constitute a mealy-mouthed, weak-kneed capitulation to “Islamofascism” as some commentators seem to insinuate when on the topic of negotiating with one’s enemies. Even if Hamas turns out to be bluffing on its past indications of a pragmatic policy toward Israel, the track record of foreign policy absolutism in dealing with the reality of this Islamist movement in the last 8 years doesn’t exactly inspire confidence for the future.
Thus far, the current administration has been unwilling to engage with the Hamas reality. It instead favors the Bush-inherited “three no’s contingency”: that the Islamist group, if it is to be viewed as a legitimate actor, must reverse its trifecta of not recognizing Israel, not abiding by past PLO agreements, and not pledging to cease violent means to achieve its goals.
Given the increasing disrepute among Palestinians with which many in Fatah have fallen, it’s unclear exactly how such a status quo policy caveat will achieve the national security interests of America (let alone those of Israel or the Palestinians).
This is surely one illusion that, good intentions not withstanding, the Obama administration would do well to reconsider.
To flesh out these and other issues related to Islamist movements in the Middle East, the New America Foundation is hosting an event TODAY from 12:15 to 1:45pm EST with Alastair Crooke, Founder and Director of Conflicts Forum.
He will be discussing the theme of his new book, Resistance: The Essence of the Islamist Revolution, which explores what he calls the “Islamist Revolution” in the Middle East, offering some strategic insights into the origins and logic of Islamist groups which have adopted military resistance as a tactic, and how this impacts American and European policy options in the Middle East.
Joining him as moderator and respondent respectively, will be Middle East Task Force Co-Directors Daniel Levy and Amjad Atallah.
— Tom Kutsch

4 comments on “STREAMING LIVE: Alastair Crooke On The (Islamist) Elephant in the Room”