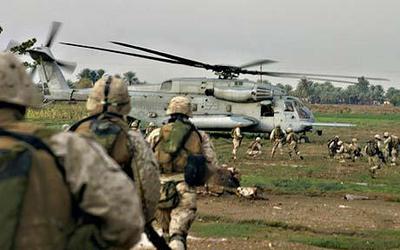 Sunday’s strike of a compound in Syria by American Special Forces, purported to have killed important Al Qaeda in Iraq (AQI) smuggler Abu Ghadiya will have broad strategic consequences for America and the Middle East as a whole.
In a fascinating article, The New Republic yesterday described how Sunday”s strike is part of a wider effort from the White House, which has recently given US Central Command jurisdiction to conduct attacks on the sovereign territory of other countries, ranging from Pakistan and Syria to Somalia, Yemen, and even potentially Iran.
The reasons for this move are unclear. Historian and Iraq expert Juan Cole, who consistently offers some of the best insight into Iraq and the Middle East, believes the strike was designed to warn Syria against sheltering Al Qaeda elements. Somewhat more cynically, he also suggests that it could be meant to influence the upcoming Presidential elections, by keeping Al Qaeda from staging attacks in Iraq before next week.

Joshua Landis at Syria Watch suggests that the strike was meant not only as a warning against Syria, but also as a reaction to Syria’s recent unwillingness to share intelligence and cut down on insurgents crossing the porous border with Iraq.
Yet the distressing aspects of the raid are not the motivations behind it, but rather the direct outcomes the raid may have on the region and its implications for the future of American policy in the Middle East.
As Cole points out, the attack on Sunni militants in Syria could in part destabilize the country, which is 80% Sunni but controlled by Ala’wites, a small Shi’a sect. This is a legitimate fear, but I am far more concerned that the attack, meant to scare the Syrians, will simply lead to a hardening of attitudes toward America.
Syria has already shut down an American school and cultural center, and aid groups, many of whom help Iraqi refugees, are worried about potential backlash from the government.
The raid has also raised potential problems in Iraq, with Iraqi politicians condemning the raid as the United States tries to hammer out a Status of Forces Agreement governing the operation of American troops. By using Iraq as a base to attack Syria, we damage Iraq’s ability to negotiate with its neighbors, raising the specter of more, not less, insurgent violence as a result.
Further, Syria plays an important role in Middle Eastern politics; its alliance with Shi’a Iran bolsters Hezbollah, and they are currently in negotiations with Israel for a possible peace treaty. Engagement with Syria thus could potentially (by no means a guarantee) shore up Israel’s position in the Middle East, pushing it away from Iran and thus diminishing the power of Iran and terrorist groups in the region.
Of late, Syria had made conciliatory gestures towards the west (such as engaging in diplomatic talks with France) and had increased its intelligence sharing with American forces. But by violating Syrian sovereignty, America takes away the incentive for The Asad regime to cooperate, as it shows we cannot be trusted as an honest broker that is willing to provide for Syria’s security.
In threatening to destabilize the country, we run the risk of driving Syria closer to Iran, as America eventually draws down its troop levels and Iran solidifies its power in the region.
Isolated strikes to kill or capture Al Qaeda leaders can be an effective tool in weakening the organization. But by wantonly violating Syria’s sovereignty purely to send a message, we risk putting ourselves, our armed forces and our allies in increasingly untenable positions and threaten the future of the security of the region as a whole.
–Andrew Lebovich

24 comments on “Striking Syria–A step back for American Foreign Policy?”