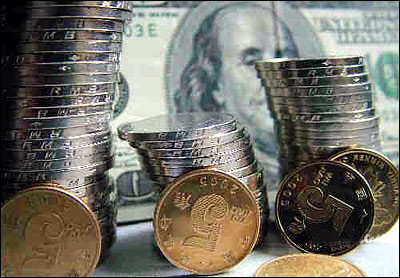 At this morning’s superb economic event at the New America Foundation and in testimony before the Senate Foreign Relations Committee yesterday, there was a lot of discussion about China’s recent proposal to consider a move away from the US dollar and towards the use of a new “super-sovereign reserve currency.” The intention according to China’s central bank governor, Zhou Xiaochuan, would be to ultimately “create an international reserve currency that is disconnected from individual nations and is able to remain stable in the long run.”
I have long argued that US policy-makers must take into account the possibility that at some point in the future the US dollar may not play the same role in global finance that it does today and prepare for that contingency.
Since China’s proposal, I have had several conversations with knowledgeable China-hands and economists who argue that the proposal is simply posturing and that the shift away from the US dollar is not likely to happen anytime soon, so why worry? In reply I simply note that in today’s parlous economic environment, taking anything for granted would be a grave mistake – especially when the amounts involved are so very, very large.
The US represents less than 5% of the world’s population and just over 20% of the world’s GDP. And yet, the US dollar represents approximately 64.6% of the world’s official currency reserves. The SDRs that China refers to, and which have received increased attention of late, represent a multi-currency basket under the auspices of the IMF. This basket is weighted as follows – 44% US dollar, 34% Euro, 11% Yen and 11% Pound Sterling.
The IMF estimates that, as of the 3rd quarter of 2008, the most recent period for which reports are available, there were $4,358 billion held in official reserves around the world, with an additional $2,536 billion in unofficial or unallocated reserves – for a total of $6,894 billion total foreign exchange holdings. For simplicity sake, let’s assume that these unofficial reserves are held in a similar proportion to the official ones.
Simple arithmetic demonstrates the size of the shift that the US dollar could possibly suffer if, at some point in the future, its weight in global reserves were to decline to its SDR weighting. A decline from 64.6% to 44% equals 20.6%. 20.6% of $6,894 billion equals $1,420 billion – or about ten percent of US GDP that would be shifted out of the US dollar to achieve SDR weighting.
To be clear, I am not suggesting that this is imminent or even likely. But some holders of currency reserves, in particular the unofficial, or privately held ones, are in the business of anticipating currency movements and trying to profit from them – or at least not lose out. The short term risk is not that China is about to dump its dollar holdings. Rather, it is the trading floors and fund managers around the world, whose job it is to be ahead of the curve, who may well start to re-weight their holdings on the marginally increased probability that this re-weighting might actually occur in the future. As the numbers above suggest, even a relatively small shift could represent a meaningful shift of capital and resulting impact on the dollar’s value.
There are, of course, multiple forces at work in foreign exchange markets and, among the sure-fire ways to lose money in this world are: 1) to play currency markets and 2) to bet against the US and the US dollar. Nevertheless, the fact that this is now likely to be a discussion topic on the agenda for the London Summit, suggests that the US should not take for granted that the US dollar will retain its current role in the world forever. Currencies are traditionally viewed as a reflection of a country’s economic strength. The US cannot lose sight of the crucial role that the “exorbitant privilege” to print the world’s currency provides and do what it can to ensure that this privilege is not lost. We can’t take anything for granted.
— Douglas Rediker

Juan Cole on Engaging the Muslim World
LIVE STREAM TODAY: Bernard Schwartz, George Soros, Martin Wolf, Laura Tyson and Many More on “What Will Take the Place of the U.S. Consumer?”