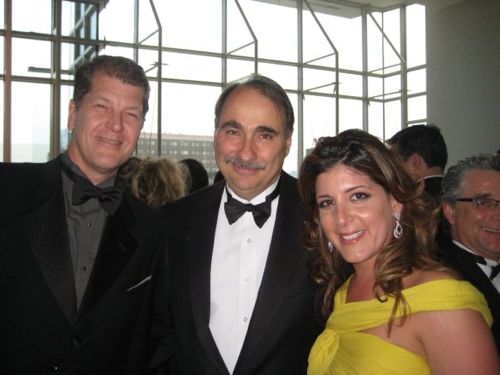 (Washington Note publisher Steve Clemons, Obama political guru David Axelrod, and Al Jazeera’s Mysa Khalaf)
Yesterday evening, I chaired a dinner featuring Austan Goolsbee, the charismatic economic guru of Barack Obama’s presidential campaign and a key adviser to the President in the White House. The meeting was off the record — fascinating and insightful, but off the record. Just keep in mind that there are 6-8 million vacant homes out there. Not good.
What wasn’t off the record at the dinner was my conversation with Wall Street Journal White House correspondent Jonathan Weisman who, like me, has been frustrated with senior White House officials apparently sending inconsistent messages about some important policy questions.
Weisman made the point that listening to Barack Obama, he seemed to be saying that America’s relations with Iran would be bounded by questions about what international norms Iran chose to abide by or ignore. In other words, Weisman was reading the Obama tea leaves and heard that America was going to reinstitute “conditionality” in the terms of its engagement with Iran.
Shortly before I chatted with Jonathan Weisman, I heard David Axelrod’s exchange with Wolf Blitzer on CNN’s The Situation Room who while at first appropriately saying that Iran’s domestic turmoil was about a key struggle within Iran over its soul and direction and not about the United Sates, then said:

AXELROD: Well, I will just repeat what the president said today. All of this is now in the hands of the Iranians. They can choose to isolate themselves from the world through their behavior, or they can try and develop relationships. And we will await — we will wait and see what they do.

This sounds like conditionality on our engagement with Iran to me — but perhaps I am working too hard at trying to understand what the real meaning of David Axelrod’s statement is.
Jonathan Weisman called a senior national security adviser close to Barack Obama who allegedly said that there is no change in America’s course to engage Iran. No change in policy. No conditionality.
If the senior White House adviser knows the definitive truth of the situation, I am glad — because I agree with that policy position.
But one has to admit that David Axelrod’s comments — and even those of the President at a minimum flirt with the “conditionality” issue of future US talks with Iran — and that if we did take such a course, we will miss any opportunity to engineer a strategic shift in America’s relations with Iran, which happens to be right up near the top of America’s strategic priorities right now.
— Steve Clemons

Guest Post by Patrick Doherty: The McCaffrey Plan
Oakley and Annie on Iran