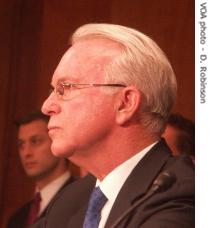 One of the central challenges for the next president will be to address the precipitous decline in the United States’ popularity throughout the world that has characterized the Bush years. This is in part a result of stepped-up US counterterrorism efforts, which have clashed with once sacrosanct internationalist tenets like sovereignty. While this effort to realign the twin efforts will take many years and involve a host of actors, reforming the State Department’s institutions and communications strategy will be an integral part of this effort.
If James Glassman — recently confirmed as Under Secretary of State for Public Diplomacy — were weighing in on the ongoing terrorism salon here at The Washington Note, it seems he would lean towards the camp that proffers ideology as the chief animating feature behind terrorism and proposes a vigorous contestation of this ideology to achieve both diplomatic and counterterrorism success.
Glassman emphasized in his testimony to the Senate Foreign Relations Committee the importance of ideas in the struggle against Islamic extremism and suggested the chief challenge for the United States is to demonstrate the superiority of our democratic ideals. He stated:

The war against Al Qaeda and other extremist threats to peace, freedom, and justice is not only military. It is a war of ideas. Secretary of Defense Gates made just this point when he extolled “soft power” in a lecture at Kansas State University in November.5 As the 9/11 Commission put it: eliminating Al Qaeda requires “prevailing in the longer term over the ideology that gives rise to Islamist terrorism.”
If I am confirmed, this will be the main focus of my attention: the war of ideas – perhaps better expressed as global ideological engagement. “Al Qaeda,” as Michael Doran, a scholar of Middle East politics at Princeton and now a Pentagon official, has written, “is the ideological organization par excellence.” The organization disseminates its messages through mass media and the Internet, and our job is not merely to explain and advocate American values and policies but to counter the disturbingly persuasive ideology of the enemy.

Glassman’s emphasis on ideology directly contrast to scholars such as Robert Pape who argue that grievances, humiliation, and nationalism rather than ideology, best explain Islamic terrorism. Pape argues that Islamic terrorists are motivated by specific, material goals, including the desire to expel Western military forces from their homelands.
This will surely be the subject of debate as Under Secretary Glassman will discuss his views on how the United States can use technology to enhance its global strategic communications effort at the New America Foundation tomorrow, Friday, July 25 from 12:15pm – 1:45 pm.
— Ben Katcher