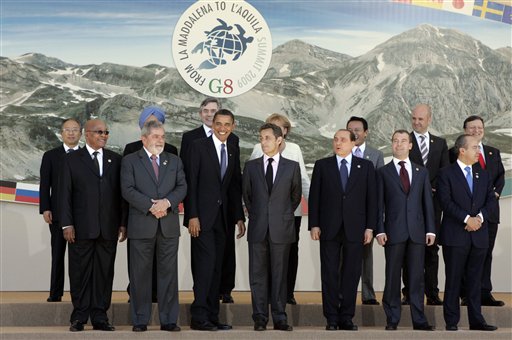 In the aftermath of last week’s G-8 summit in L’Aquila, Italy, there is a debate emerging over whether to expand the group. The most popular proposal would include Brazil, China, Egypt, India, Mexico and South Africa in a G-14.
Not surprisingly, the leaders of the six potential members generally support expanding the organization, while the current G-8 members are mixed. Russia, Germany, and Canada – whose influence stand to diminish from expanding the group – oppose expansion at this time.
The United States supports a more inclusive format. President Obama said “One thing that is absolutely true is that for us to think we can somehow deal with some of these global challenges in the absence of major powers like China, India and Brazil seems to be wrongheaded.”
I think the Obama administration is correct to support expanding the club. Updating international institutions to reflect today’s power realities is important and long overdue.
It is interesting to note, however, that the G-8 was originally intended as a kind of League of Democracies for the wealthy republics of Europe and North America (and Japan). Indeed, in 2006, Russia’s G-8 presidency was considered by many to be an embarrassment because of Russia’s increasingly authoritarian political system.
The debate surrounding “the issue of the Gs” reflects an acknowledgment that the G-8 will not have the capacity to make global policy if it does not expand to include non-democratic countries.
— Ben Katcher