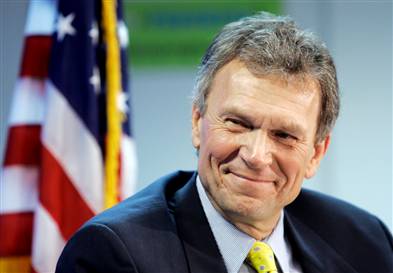 During the battle over John Bolton’s Senate confirmation to serve as US Ambassador to the United Nations, a post that Bolton ultimately achieved through presidential recess appointment rather than by Senate vote, I noticed a peculiar difference between leading Democrats and leading Republicans.
On the Sunday morning talk shows, leading Democrats kept saying that while they weren’t big John Bolton fans, ultimately the President would win the fight over the confirmation of America’s leading pugnacious nationalist. At various times during the 21-month long struggle, then Senator Joseph Biden, Senator Chuck Schumer, Senator Richard Durbin, New Mexico Governor Bill Richardson, and Senator Patrick Leahy all said on political shows that Bolton would get confirmed. To his credit, Durbin actually withdrew his statement and issued a release through this blog commending those working hard to stop Bolton’s confirmation.
Dems were conceding before they needed to — and the Republicans, through the entire battle, were declaring victory even though there was dissension in their own ranks and they were losing the confirmation war.
Obama seems to be replicating the pattern — conceding defeat on Tom Daschle, one of the people most responsible for actually creating the Obama political machine — and on the very same day yielding a senior cabinet position at the Department of Commerce not to a leading business official or Democratic Congressman or Governor — but rather giving it to Judd Gregg who voted 14 years ago to abolish the Commerce Department.
People will be parsing for some time Tom Daschle’s missteps with his taxes, and why he wasn’t vetted more by the Obama team, and whether Rahm Emanuel was part of the game knifing Daschle from behind, and what the political upper crust in Washington sees as “normal” when they leave office — but what this was mostly about was the opposing team taking down one of Obama’s most important chess pieces.
This was all about Obama, about humbling him, about dividing progressives over whether to support or oppose Daschle.
What we see are two interesting things. First, we see that the divisions between the political franchises inside the Obama camp are fraught with tension and anger now. Many of Daschle’s camp are quite furious with Obama’s chief of staff.
And the Republican opposition, which has appeared of late to be weak and inchoate. . .isn’t.
— Steve Clemons