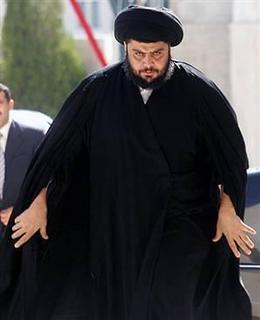 Supporters of the surge give many reasons for the dramatic and real reduction of violence in Iraq over the past 16 months. These range from the rise of the Sahwa movement to General Petraeus’s new counterinsurgency strategy to the newfound independence of Nuri al-Maliki’s government, backed by strengthened Iraqi Security Forces. But a major cause that gets significantly less attention is the cease-fire of Moqtada as-Sadr’s Mahdi army, in place since late August 2007.
This cease-fire has lasted through recent attacks on Shiite groups, including Mahdi Army members, in Basra and Sadr City. Some, including Ambassador Ryan C. Crocker, have portrayed this as a sign that as-Sadr is committed to the political process. Yet if anything, the cease-fire and the recent actions taken by the American and Iraqi governments have strengthened, not weakened, as-Sadr and his Mahdi Army. New America Fellow Nir Rosen noted this growing strength and as-Sadr’s centrality to Iraqi politics early in 2006, before the Samarra Mosque bombing or the surge.
By all indications, this emphasis on the political process has been successful, though to the detriment of U.S. interests. Sadrists control major blocks of parliament, major newspapers and websites are abuzz with the news that Iraqi Prime Minister Nuri al-Maliki, in large part under pressure from Sadr and allied lawmakers, announced that he was negotiating a timetable for American withdrawal from Iraq.

As-Sadr has also benefited immensely from the cease-fire. As his movement grew, it was becoming harder to control. It also allowed Iran to influence more extremist elements within the Mahdi Army, through continued support of money and arms.
But as a recent Center for a New American Security report points out, the recent operations by the Iraqi government in Basra and Sadr City may have helped eliminate these more extremist elements. This will allow as-Sadr to reassert control over his movement, while appearing to be reforming the Mahdi Army’s violent, criminal image. It also burnishes as-Sadr’s image as a nationalist who opposes excessive Iranian influence.
These recent Iraqi Army actions also allow as-Sadr to weaken rival Shiite factions, notably the Islamic Supreme Council of Iraq (ISCI) supported by the armed Badr brigades. The Badr brigade forms an important part of government security forces, but by positioning himself as a counter-weight to Iranian influence, as-Sadr throws light on the level of Iranian support for groups like the Badr brigade or the “special groups” recently fought by US forces and the Iraqi army.
Thus the surge cannot necessarily be said to have weakened militia groups in Iraq. Rather, we have succeeded in reworking the militia structure, inadvertently aiding the Sadrists both in the streets and in parliament by eliminating their rivals, while not posing a serious threat to the organization. They are still armed, and as-Sadr is still just as opposed to America’s occupation of Iraq, and Iraq’s current government. Ultimately, it is Iraq’s political process that has shifted towards as-Sadr, not the other way around.
— Andrew Lebovich
Note: Though media reports commonly refer to Sadr as Moqtada al-Sadr, in spoken Arabic he is referred to as as-Sadr, which is how Ambassador Crocker, an Arabic speaker, refers to him in his testimony.

24 comments on “Moqtada as-Sadr: Nearly Forgotten, but Far from Gone”