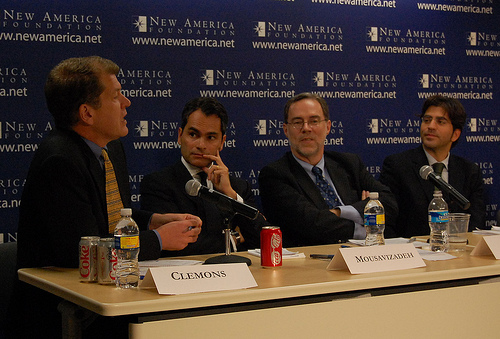 The events in Iran over the past week have raised a number of important and difficult questions. What is the source of Iranian discontent? What is the likely outcome of the protests?
Was the election fraudulent or not?
And, most importantly from an American perspective, What does all of this mean for American strategy?
Suffice it to say that there are multiple schools of thought inside the New America Foundation with one school led by Steve Clemons, Amjad Atallah, and Afshin Molavi — and another on a different page with Flynt Leverett and Patrick Doherty. Parag Khanna is out there — but may have a foot in both camps. Nader Mousavizadeh has a nuanced approach he’s promoting called “Option Ignore Ahmadinejad” which tilts toward Clemons — and Terror Free Tomorrow’s Ken Ballen tilts toward Leverett and Doherty.
To discuss the ongoing events in Iran and address these questions, the New America Foundation is hosting an event TODAY from 3:30pm – 5:00 pm.
The complete roster of participants is below:
featured speakers
Ken Ballen
President, Terror Free Tomorrow: The Center for Public Opinion
Author, “Iranians Want More Democracy,” CNN, June 16, 2009
Steve Clemons
Director, American Strategy Program
New America Foundation
Publisher, TheWashingtonNote.com
Flynt Leverett
Director, Geopolitics of Energy Initiative
New America Foundation
Author, “Ahmadinejad won. Get over it,” Politico.com, June 15, 2009
Afshin Molavi
Fellow, New America Foundation
Author, Persian Pilgrimages: Journeys Across Iran
Nader Mousavizadeh
Consulting Senior Fellow, International Institute for Strategic Studies
Former Special Assistant to U.N. Secretary General Kofi Annan
Author, “Option Ignore Ahmadinejad,” Washington Post, June 18,2009