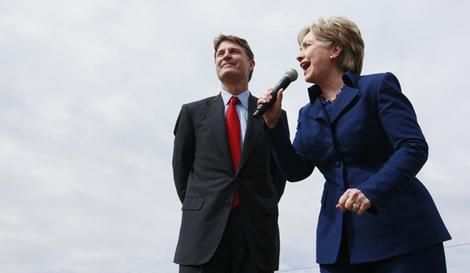 Word has reached me that at Barack Obama’s Hawaii retreat, Evan Bayh‘s chances to find himself the next Democratic VP candidate have moved to better than 50/50.
The conflict between Georgia and Russia has been one of several factors that has helped boost his status. Bayh’s support of the Iraq War and general hawkishness are seen by some as a balance to Obama’s call for a new and different kind of global engagement strategy that McCain’s followers consider naive.
I could make a case why Bayh might make sense for the Obama ticket — but it would be an intellectual case based on regional politics and an olive branch to some Hillary Clinton supporters, not one of passion. Recently, I wrote about Birch Bayh, Evan’s magnificent father, the other day who has led on women’s rights, civil rights, and civil liberties protections in ways that Evan, the son, hasn’t come close to matching.
But just stating that the son doesn’t yet fill the shoes of the father won’t seriously handicap Bayh in Barack Obama’s estimation.
So, i want to open the door to others to share their views.
In a constructive, civil manner, share with readers — and with the Obama campaign — why you think Evan Bayh SHOULD NOT BE or SHOULD BE Senator Obama’s running mate.
What turns you on? What turns you off? Again, be civil, please.
I’ll start with my own:

1. Why Bayh Should Not Be VP — In contrast to his indefatigable, passionate, and legislatively masterful father, Evan Bayh’s approach to policy and politics comes off as flat and squeezes the air, sizzle, and enthusiasm out of the Obama balloon — a balloon that has already been deflating somewhat as Michael Tomasky conveyed in the Washington Post this last Sunday.

Look forward to your views pro and con. . .
— Steve Clemons