We need a professional constabulary force to sustain stabilization operations in Iraq.
The terrible events at Haditha have us all wishing that our forces were doing a better job in relating to the non-combatant majority in Iraq. 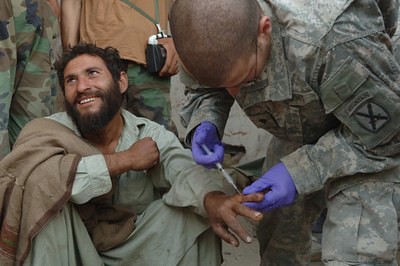 While the full details of what really happened at Haditha await future Article 32 decisions and (ultimately, I suspect) court martial findings, we are all wondering why the Marines did not show more respect for the code of conduct they had been taught.
Increasingly we cans see that the long Iraq stabilization process calls for constabulary and policing skills, and we can see that those skills are almost completely absent amongst US forces in Iraq.
Can we wave a wand and fix this lacuna? Will a bit of training do it? Can we fix it by seeing that the next waves of marine deployments are preceded by more constructive indoctrination in the arts of policing and stabilization?

The United States needs a national, deployable conflict constabulary capability, but the Marine Corps isn’t where we will build it.
Marines are light, fast, high-impact; assault-capable troops with great close-in kinetic capacity and short-distance maneuver capacity but low sustainment capacity.
Marines do well when they are deployed in situations that play to their strengths. They do far less well when they are mis-deployed.
I spent four long years in our military adventures in Indochina. One of the great exercises in mis-deployment was General Westmoreland’s decision to use the Marines in a static, siege situation in Khe Sanh.
Locked-down in static warfare with nothing to assault and no objectives to take, the Marines fared badly. Most military historians score Khe Sanh as one of our larger tactical defeats in that war.
Ground troops are trained to “kill people and break things” — the phrase has been a standby in official doctrine and training manuals for decades. Useful in one stage of warfare, but not the ideal skill set for long-term stabilization.
Constabularies protect. Conventional soldiers kill.
If one were to place an experienced Marine and an experienced New York City cop on the same street corner in Fallujah and both heard a burst of small arms fire, the instant reactions of the two would differ sharply.
The Marine would drop, orient his weapon in the direction of the gunfire, and focus on eliminating the threat.
The cop’s first instincts would be to scan the scene, see who was at risk, and focus on getting apparently innocent folks out of harm’s way.
Kill vs Protect: Basic Instincts. Basic skill sets.
The US military, especially the US Army, has a very long history of rejecting the constabulary/gendarmerie mission. They don’t like it. They are suspicious of it. They don’t want it to contaminate their core culture.
Yet our interventionist, pre-emptionist foreign policy will continue to require a substantial capacity for conflict-zone policing.
America needs a national, deployable, internationally capable constabulary/gendarme force for conflict stabilization missions. It needs to be well trained, ready to go, and able to remain deployed for long periods.
Stabilization takes much longer than combat in most of the wars we are likely to initiate in the next decade or two. To create this constabulary capacity would require serious civilian political leadership.
The services will resist the mission bitterly. We will either have to force the Army to build and maintain another, distinct element, or we will have to create one from scratch.
The latter is probably more feasible. But I am not holding my breath for the emergence of that strong civilian leadership that will force the creation of this desperately-needed conflict/stabilization policing capability.
As a former professor of strategy I prefer teaching to preaching, and in that spirit I will end by proposing two recommended books for interested readers of this post.
You might start with Robert Perito’s Where Is the Lone Ranger When We Need Him? Followed in close succession by David H. Bayley’s recent Changing the Guard: Developing Democratic Police Abroad. Bayley, probably the world’s top specialist in democratic policing and conflict policing, is advisor to the police commission in Northern Ireland. He discusses in detail how training and doctrine can instill a “protect” ethic amongst men who face danger and threat. Perito, now at the US Institute for Peace, is the numero uno on constabulary functions in stabilization operations.
John Stuart Blackton is a retired Senior Foreign Officer and (further) retired professor of Security Policy at the National War College. He currently undertakes consulting assignments in security and governance in conflict and post-conflict settings for clients in Washington and abroad with a particular focus on Afghanistan and Iraq.

Mohammad Mohamedou:: The 1970s Redux — In Politics and at the Movies
Dave Meyer: Revisiting the GWOT

15 comments on “John Stuart Blackton: A Lesson from Haditha”