On February 25, 1969, Lt. (j.g.) Bob Kerrey, a Navy SEAL, led a patrol to Thanh Phong, Vietnam, an action for which he won the Bronze Star. Nearly four decades later, that mission casts light on the current concern over what apparently happened in Haditha, Iraq, on November 19, 2005. And the possible similarity between the two incidents, 36 years apart, might give Kerrey, the Vietnam vet, a good occasion to reconsider his support for the current fighting. 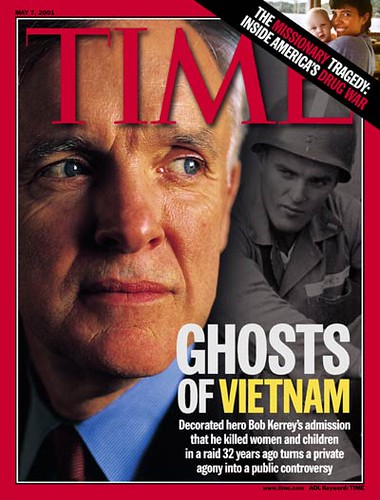 According to the citation that Kerrey received for his “heroic achievement” in Thanh Phong, “the net result of his patrol was twenty-one Viet Cong killed, two hootches destroyed and two enemy weapons captured.” A few weeks later, he led another operation that earned him a Congressional Medal of Honor. Badly wounded in that mission — he lost a leg below the knee — Kerrey the war hero went on to a sterling career in American politics; he was governor of Nebraska, then a two-term senator from the Cornhusker State.
But as with so many Vietnam veterans, ghosts from the war continued to haunt him. In 2001, disturbing reports emerged about that February 1969 mission to Thanh Phong. According to one of the SEALs, Gerhard Klann, the Americans, acting on Kerrey’s orders, rounded up unarmed civilians, women and children, then intentionally killed them. Klann told his story to “60 Minutes” and to The New York Times magazine.

For his part, Kerrey issued what might be called a semi-culpa in response. As he remembered the incident, he and his men returned fire, and when they inspected the fire zone later, “all we had was women and children that are dead.” He emphatically denied that he had ordered the killing of any civilians; yet at the same time, he acknowledged “anguish and guilt” about Thanh Phong. “I’ve never been able to justify what we did, either militarily or certainly not morally,” Kerrey told CNN. And while his Medal of Honor featured prominently in his campaigns, his official biographies did not so much as mention his Bronze Star.
Much time has since passed, and we’ll probably never know the full truth about what happened at Thanh Phong. From our safe place on the homefront, it’s easy to condemn the killings of the innocent, but at the same time, it’s impossible for most of us to know what it was like to be under fire in Vietnam, in a war in which civilians were sometimes enemy combatants. And that explains why the war was so difficult, and so costly, both to Americans and to Vietnamese. Kerrey and his men were put in a nearly impossible situation, fighting guerrillas who blended into the larger population. And so maybe they snapped. War is, after all, hell.
One who understands this wartime phenomenon is Rep. John Murtha (D-Pa.). Murtha served with distinction as a Marine in Vietnam, and so he is in a good position to compare the combat-stress of Vietnam then to the combat-stress of Iraq today. Murtha was tipped off, early on, to the awful killing of perhaps two dozen Iraqis in Haditha. Seeking to shape the publicÃ¢â‚¬â„¢s understanding of the Haditha incident, Murtha has argued, in effect, “Well, what did you expect? If you put Americans in an impossible situation, with no clear plan or prospect of victory, they will eventually snap.” That’s why he is in favor of withdrawing from Iraq; it’s a no-win situation, he argues, a war of all against all, with Americans trapped in the middle.
For his part, Kerrey, now president of the New School in New York City, has been supportive of the Iraq war; he made a point last month of bringing in Iraq super-hawk John McCain (R-Az.) to be a New School commencement speaker. But he might think to himself, “If there had been as much media coverage in Vietnam in 1969 as there was in Iraq in 2005, maybe Thanh Phong would have been recorded as an act of atrocity, not an act of heroism. And then I would have been facing a court martial, not a bright political career.” And if Kerrey were to think that way, with true compassion for those who have followed in his military footsteps, his view of the Iraq war would surely change. He would think to himself, “Every day in Iraq, young Americans are confronting situations a lot like what I faced back in Thanh Phong. And I don’t want to see that happen to anyone.” If he had those thoughts, his sense of duty would require him to act in a different way, in a way that would show that he had truly learned the lesson of Vietnam.
Jim Pinkerton is a columnist for Newsday, a contributing editor for The American Conservative, and a fellow at the New America Foundation.

8 comments on “Jim Pinkerton: What Vietnam Veteran Bob Kerrey Owes To The Marines at Haditha”