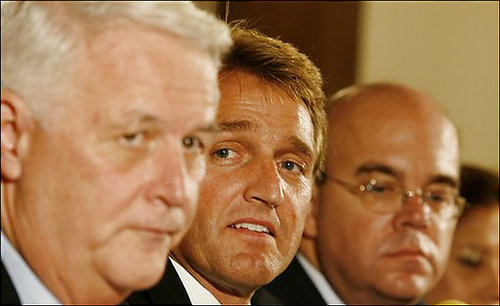 Reps. Delahunt, Flake, and McGovern (photo credit: The Washington Post)
Patrick Doherty directs the U.S.-Cuba 21st Century Policy Initiative at the New America Foundation/American Strategy Program.
It’s been a bad few weeks for Senator Menendez.
First Senator Lugar releases a report calling for a sea change in U.S.-Cuba relations. Then the Congress passes and the president signs legislation easing travel restrictions on Cuban Americans and easing the payment process for agricultural exports to Cuba. Then, this week, Senators Dorgan and Enzi announce their legislation to end the travel ban to Cuba so that all Americans can travel freely to the island.
Then today, The Washington Post reports that Senator Lugar released a letter sent directly to the President calling for direct talks with Cuba. Here’s the money quote:

“…I ask that you also consider the designation of a special envoy for Cuba who would report directly to Secretary of State Clinton….This Special Envoy’s responsibilities would begin with the initiation of direct talks with the Cuban Government…”

And the House, in a few moments, is set to announce its companion legislation to end the travel ban.
For those interested, Representatives Delahunt and Flake will be holding a press conference today with leading Cuban Americans who are supporting their legislation. Whereas the Senate showed strong farm state and business support for the bill, Representative Delahunt has reached out to leading Cuban Americans, who are also calling for an end to the travel ban and an end to the embargo.
The speakers will be: Reps Delahunt (D), Flake (R), Emerson (R), McGovern (D), DeLauro (D), Snyder (D), Berry (D), Chaffetz (R), Donna Edwards (D) and Barbara Lee (D). In addition, I heard that Representative Delahunt plans to place a call to a human rights activist in Havana who wanted her voice to be heard supporting the change that this kind of legislation represents.
The location of the press conference, for those of you in the neighborhood, is Rayburn 2255 at 11am today.
Below the fold, you can find the statement by Miriam Leiva and Oscar Espinoza Chepe, two human rights activists in Havana who understand that continuing the failed policy of isolation will not further the cause of human rights and freedom in Cuba.
Amnesty International agrees with them.
The list of outside supporters of this legislation is impressive. Click here to see the full list of statements of support.
The U.S. Catholic Conference of Bishops is also backing the legislation.
Poor Senator Menendez. It’s not all gloom, though. On the bright side, playing a major role keeping U.S. policy static on any issue for 50 years is quite an accomplishment.
Now it’s time to move on.

***
Statement of Miriam Leiva and Oscar Espinoza Chepe
***
Havana, April 2, 2009
We fully support lifting all restrictions on Americans to travel to Cuba. It would contribute to better knowing and understanding the realities in our countries. Even by a simple conversation, sharing every day experiences, Americans would be demonstrating how your society is capable of constantly deepening and improving democracy, and could help our own efforts for democracy.
Restrictions from the United States, particularly the embargo, have been used by the Cuban government as an excuse to justify the totalitarian regime and repression. Those policies have proven ineffective and counterproductive.
Although in Cuba no significant changes have been put in place by Raul Castro’s Administration, for the first time in 50 years the possibility exists to open a pathway to change. The alleged willingness of the Cuban President to improve relations with the United Stated must be encouraged.
It is a contradiction that The United State is the 4th largest Cuban trading partner, but Americans and Cuban Americans are deprived of their right to assist the Cuban people by building bridges.
We believe that contacts between Americans and Cubans from all walks of life and American tourism are of the utmost importance.
Miriam Leiva
Independent Journalist
Human Rights Activist
Oscar Espinosa Chepe
Independent Economist and Journalist
Prisoner of conscience of the 75, sentenced to 20 years on March 2003.
On conditional release due to serious health problems
— Patrick Doherty

G-20 Assessment: Good For the Developing World, Stimulus Not Addressed
Interview with Martin Wolf on What We Should Expect from G-20 but Won’t Get