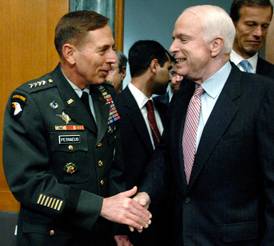 The Obama campaign and various surrogates jumped on comments made by Senator John McCain last week that it was “not too important” when American troops come home from Iraq, but rather what the conditions on the ground are.
Yet this is not the most interesting quote from Sen. McCain’s remarks. The focus should instead be on his statement that “General Petraeus is going to tell us in July when we are [ready to withdraw].” This is reminiscent of President Bush’s assertions lat September that he would only base his decision on the future of the surge primarily on Petraeus’ recommendations.
When President Bush or Senator McCain defers to Petraeus in this way, they are abdicating responsibility for decisions made about Iraq policy. This is a feeble attempt to hide behind the legitimacy of the military, one of a declining number of institutions viewed favorably by Americans (a 69% approval rating in a 2007 Gallup poll, as opposed to 14% for Congress).
But it is more problematic if McCain or others rely on Petraeus because they genuinely believe only the generals can make the correct decisions about Iraq. This is not at all to say that generals are incapable of national leadership on important issues; many people, including Steve Clemons, have written of the importance of prominent military and civilian leaders such as Dwight Eisenhower. Eisenhower’s experience commanding military operations in World War II helped to inform a balanced approach to foreign and domestic policy. Eisenhower was an avid centrist, famously using his final speech in office to warn against the growing military-industrial complex in America.
Unlike the centrist Eisenhower, however, Petraeus has already been wittingly or unwittingly politicized by the war in Iraq. He, President Bush, and now Sen. McCain have staked their credibility and reputations on the success of the surge. Setting aside arguments on the effectiveness of the surge put forward by respected scholars like Michael O’Hanlon on one side and the New America Foundation’s Nir Rosen on the other, this confluence of interest has brought Petraeus before Congress and the American people not just as a general, but as a defender of the Iraq war and advocate of administration policy.
Further, allowing only the Army to make major decisions about foreign policy sets a dangerous precedent. This action would establish the Army essentially as an independent force, and undermines the concept of civilian control of the military. This control allowed President Truman to rein in the extremely popular General Douglas MacArthur, who had plans to use tactical nuclear weapons against China. And in the absence of this control, allowed General William Westmoreland to tell Congress and the American people that the end of the Vietnam War was in sight, even on the eve of the Tet offensive of 1968.
General Petraeus is by all indications a highly intelligent, thoughtful, and capable general. But If Sen. McCain would simply rely on Petraeus to make decisions, he or others on both sides of the political spectrum reduce the office of the President to a vessel that blindly follows others’ suggestions instead of weighing different options from different perspectives, and choosing the most appropriate for a given situation.
— Andrew Lebovich

16 comments on “<em>Guest Post</em>: A Belated Note on McCain, Petraeus, and Civil-Military Relations”