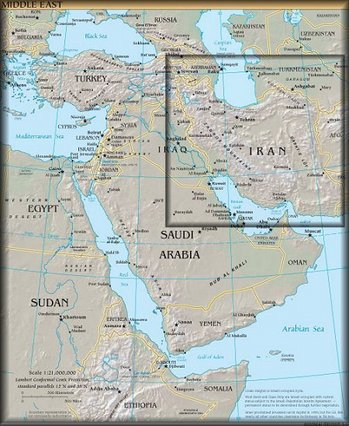 Nader Mousavizadeh, a former special assistant to Kofi Annan, provides a fresh, critical perspective on the Obama administration’s policy toward Iran in an op-ed in today’s Washington Post.
According to Mousavizadeh, the Obama administration needs to focus on Iran’s intentions rather than its capabilities. We need to identify what Iran wants and find a way to come to a reasonable accommodation that can be accepted by all of the major stakeholders in the region. This is the only way to prevent our conflict with Iran from continuing to simmer until it eventually explodes.
Here are the key graphs:

By focusing on the means of Iran’s ascendancy — its pursuit of a nuclear weapons capability and its support for Hezbollah and Hamas — we are avoiding the vital question of ends. Concentrating on capabilities instead of intentions, we are missing the far more consequential opportunity to challenge the Iranian regime to a real debate about the country’s legitimate place in the regional security architecture and the deeply illegitimate ways Tehran seeks to achieve it….
…We need to reverse our starting point in engagement — away from the bomb and Iran’s sponsorship of Hezbollah and Hamas — and discard the notion that bigger sticks and bigger carrots will alter Tehran’s strategic calculus. Our goal should be a new geostrategic environment in the Persian Gulf, in which Iran has fewer reasons to pursue overt nuclear weapons status, and in which it won’t trigger a cascade of conflict if it nonetheless decides to do so. Rather than allow capabilities over which we have little control to force our hand, we should seek a new framework of intentions in our diplomacy with Iran.
This means opening direct bilateral talks without preconditions, focused on the many areas of common urgent concern, beginning with Pakistan, Afghanistan and Iraq. By building trust through joint efforts in arenas where Iranian and U.S. interests greatly coincide, we can move toward candid acknowledgment of each side’s legitimate interests.

For more on the nuts and bolts of how to restructure our relationship with Iran, I encourage you to read, “Time For a U.S. Iranian Grand Bargain,” by New America Foundation/Geopolitics of Energy Initiative Director Flynt Leverett with STRATEGA Chairman Hillary Mann Leverett.
— Ben Katcher

Guest Post by Win Monroe: Discerning the Substance of the Obama-Netanyahu Meeting
Support the IMF

20 comments on “Focus on Iran’s Intentions, Not Its Capabilities”