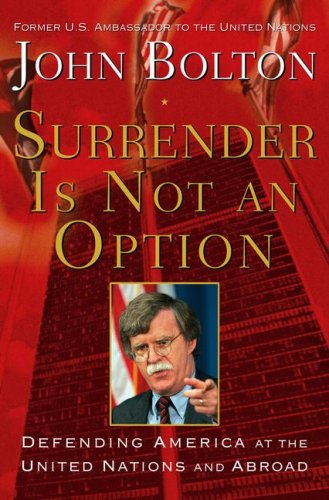 I just accomplished a goal that I set over a year ago — getting a copy of John Bolton’s book without paying for it. My good friend in the publishing industry who requested it for me reported happily that she got the impression it was the first such request his publisher had received for it and they were downright excited that someone outside movement conservatism actually wanted to read it. The first thing I noticed, by the way, is that each of the seven critical acclamations for the book is from a known conservative source, including one from John McCain.

Wasting no time, I zoomed straight into Bolton’s account of his two confirmation fights. I was eager to get a perspective from the other side on the battles that sapped a great deal of my time and energy over two years. His story distorts the issues that came out during hearings and interviews and is amazingly dependent on uniformly supportive “he said, she said,” so much so that a reader could only conclude that he was denied Senate approval because Sen. Dodd loves Fidel Castro, Sen. Chafee is an irrational, horse-trading backstabber and Sen. Frist is incompetent.
Also, Bolton mentions that Democrats themselves publicly announced high likelihood of his confirmation. The more I look back at this fight in context, the more I see it as a key moment for Congress, which until that point lacked the courage and confidence to ever stand up to the executive branch.
I’ll heartily agree with one Bolton assertion: it’s a shame that some of the public debate on his nomination revolved around his management abilities and the caricature that developed after allegations toward him came out.
Unfortunately, Bolton himself dwells on Democratic political shenanigans and devotes about no attention to the objections raised about his freelancing, his undercutting ideological opponents or his disdain for the form of multilateral engagement that is most effective at the United Nations.
I’ll probably skip the biological background but I’m actually looking forward to reading chapters on Bolton’s service in the first Bush administration and his policy battles in recent years. The sooner I get through it, the sooner I get to pick up Charles Mann’s 1491, which has been on my list for awhile and which I’m dying to start.
— Scott Paul

2 comments on “Bolton for Free!”