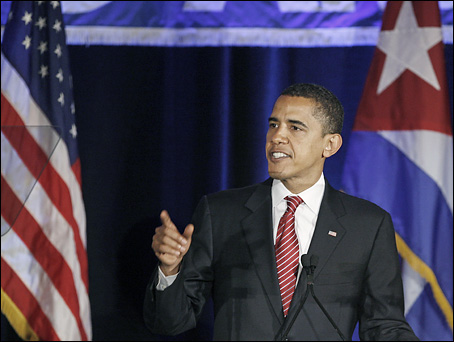 President Obama has missed yet another chance to pressure Congress to end the self-inflicted damage of a “unilateral embargo” against Cuba and to take American foreign policy writ large in a new, more constructive direction.
Today, the President officially extended the trade embargo against Cuba for another year — putting the US at odds again with roughly 183 nations that vote against the embargo each year in the United Nations.
The President’s global mystique has been based on a perception that he would shift the Bush era gravitational forces in more constructive directions — that he would support engagement and exchange as tools of American foreign policy in order to try and get better outcomes in international affairs.
But by continuing an embargo that undermines American interests and even US national security, he chooses the continuity of failure over the opportunity for change and over his own principles.
By arguing that “he will not lift the embargo until Cuba undertakes democratic and economic reforms”, Obama is perpetuating a fallacy that conditionality produces results in Cuba’s domestic internal affairs. That approach has failed for decades — and needs to be dropped.
The President has made some progress on Cuba — but its mostly progress that the most hawkish, right wing elements of the Cuban-American community desired, not progress that was based on the interests of the nation as a whole.
Obama needs to fix his course on Cuba, or despite the modest creep forward recently — helping a single class of ethnic Americans access Cuba but keeping up prohibitions on other American citizens, he will be added to a long roster of Presidents who maintained a Cold War in the America’s backyard that is, as David Rothkopf called it, “the edsel” of US foreign policy.
— Steve Clemons

STREAMING LIVE: America’s Debt Overhang
Why Should Europe Accept Turkey Into Its Union?